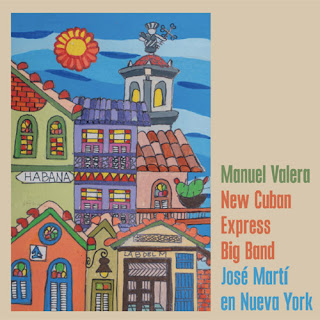 Cuban-born pianist Manuel Valera leads his New Cuban Express Big Band in a marvelous song cycle inspired by José Martí, the famed Cuban writer and independence hero. "José Martí en Nueva York" features Valera's original music based on nine poems from Martí's seminal 1891 collection, "Versos Sencillos." As Kabir Sehgal observes in his album notes, this book was one "Martí wrote during his fifteen year stay in New York as a journalist, as he helped to fund the ongoing struggle for independence in Cuba. The poems address a range of political and societal issues."

This album is a wonderfully orchestrated, sung, and played recording of these poems. While I am not fluent in Spanish, the vocals by both Camila Meza and Sofia Rei are captivating with the clarity and purity of their voices and immaculate phrasing set against the luxurious musical settings Valera provides. Furthermore, he develops each of the seven tracks with shifts in tempos and orchestral colors. The opening "Odio La Mascara Y El Vicio," begins as ballad spotlighting Mesa's vocal before transitioning into a more heated instrumental passage. The transitions in tempos and musical temperature are seamless. In addition to her ardent also, there is Andy Clausen's impressive, smoldering trombone solo.

Sofia Rei is as engaging a vocalist as shown on "Es Rubia, El Cabello Suelto," with the brass and reeds riffing against each other over a tropical rhythm. This recording is music for one's feet and one's head. One can easily imagine dancers filling a dance floor while Alex Norris' trumpet is spotlighted on a lyrical solo. Many of the members get to display their talents and be part of the marvelous ensemble playing. For "Por Sus Ojos Encendidos," the leader's piano is in the spotlight along with the trumpeter, Michael Rodriguez. Among other delights, Joel Frahm's husky tenor sax and David Smith's trumpet are featured on the spirited medley of "Yo Quiero Salir Del Mundo / Yo Pienso Cuando Me Alegro."

With all the superb singing and playing, Andrew Gutauskas's barreling baritone sax and Valera's piano solo on "Si Quiere Que De Este Mundo," are favorite moments on this outstanding recording. The performances are so genuine and naturally sung with the New Cuban Express Big Band's exquisite backing making for truly sublime listening.

I purchased this recording.  Here is a selection from the CD which is available from Greenleaf Music on bandcamp.