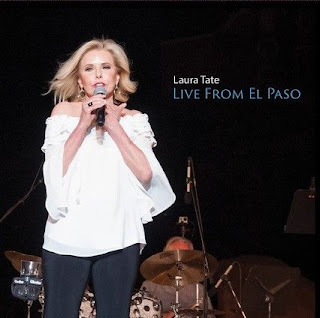 A career as an actor and singer, performing on stage and television, and directing music videos and documentaries, Laura Tate has this new album recorded in her present hometown of El Paso. Tate recruited a fine band for this live recording, that was a benefit concert. The band's foundation was pianist Jeff Paris on piano, Doug Hamblin on guitar, Terry Wilson on bass, and Tony Braunagel on drums. Also present is a horn section of Lee Thornburg on trombone, Darrell Leonard on trumpet, and Joe Sublett on saxophone. Teresa James adds backing vocals.

One shouldn't be surprised by Tate's singing. Her smooth, fluid phrasing, clean intonation, and ability to shade and build a performance's intensity are notable. There is a quality to these performances, including the striking backing she receives. Her songs transverse a range of material opening with Mel Harker's "No Place to Hide," that strikes these ears as a sophisticated performance that would have been at home on a 1960s pop recording of a Brill Building song. Then there is her updating of Thin Lizzy's "The Boys Are Back In Town."

Starting wistfully, the tempo kicks it up a notch into a swinging rocker that showcases her deft singing. Darrell Leonard's searing trumpet and Doug Hamblin's biting guitar complements her sultry Peggy Lee sounding vocal on "I Need a Man." Allen Toussaint's "Hittin' on Nothin" has a groove reminiscent of Don Covay's "See Saw." With Jeff Paris emulating Toussaint's Crescent City piano, Tate solidly interprets the Irma Thomas recording with strong solo breaks by Sublett and Hamblin. There is a touch of vinegar to her vocal on the reflective "Still Got the Blues," followed by the swamp-soul flavor of "Nobody Gets Hurt." Also standing out is her dreamy vocal on "Cowboy Jazz," and the buoyant jump blues, "Big Top Hat."

The sweet soul of "If That Ain't Love" is the final track on this splendid recording covering a range of musical modes. Tate, as indicated, is a top-flight singer who is splendidly supported on this excellent recording.

I received my review copy from a publicist. Here she sings "Still Got the Blues."