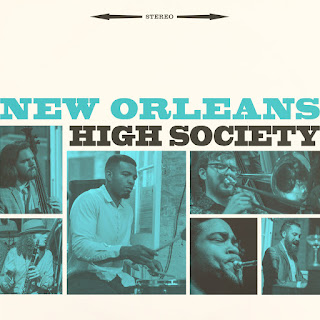 The band's repertoire does not have many surprises, and they play with a clean feel. Trumpeter Donald is a genial, if not striking vocalist, as shown on the pleasant "Down By the Riverside" that opens this set. There is more fire in his trumpet playing and ably supported by the band. One of the highlights is the Afro-Cuban rendition of Hoagy Carmichael's "New Orleans," with Arnold again crooning before Bode takes a rugged tenor sax solo against the energetic rhythm. Gustafson takes a gruff trombone solo as well. There is also a well-played rendition of Duke Ellington's "Creole Love Song." Gustafson's outstanding growling plunger mute trombone is featured along with some lovely clarinet by Bode.

An entertaining rendition of "Ice Cream" may not capture the unbridled enthusiasm of George Lewis' performances, but it has charm. Pianist Sebti ably handles the vocal on "On the Sunny Side of the Street," along with some choice piano and then solos by Gustafson and Donald. A pleasant staple of the Chicago school of jazz, "At the Jazz Band Ball," follows before Angie Z charms us with her vocal on "When It's Sleepy Time Down South." The band imaginatively reworks the trad standard, "That's A Plenty," that sports a Bode soprano solo before the performance segues into an Afro-Cuban groove with Donald's trumpet adding tropical heat over Sebti's Afro-Cuban piano before transitioning back into the traditional; arrangement.

I received a download of this album from a publicist. Here is "New Orleans" from this album.