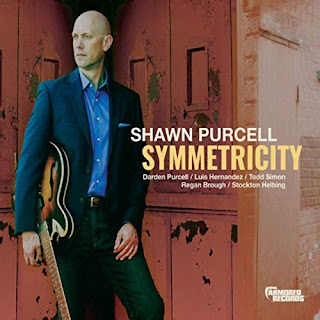 His musical influences include guitarists Pat Martino, Grant Green, Mike Stern, John Scofield, Pat Metheny, and Peter Bernstein, as well as Clifford Brown and Freddie Hubbard. Purcell has shared the stage, recorded with, and toured with top jazz artists including Terell Stafford, Nicholas Payton, Tim Warfield, Sean Jones, The Chicago Jazz Ensemble, The Metropolitan Jazz Orchestra, and many others. He has played at such venues as Blues Alley, Smalls, The Jazz Kitchen, The Blue Wisp, The Jazz Factory, and Club Bonafide and can be heard on nearly 30 recordings. "Symmetricity" is his first album as a leader and is supported by a dynamic rhythm section of pianist Todd Simon, bassist Regan Brough, and drummer Stockton Helbing. There also are notable performances by guests, vocalist Darden Purcell and tenor saxophonist Luis Hernandez.

Purcell has put together a tight, swinging backing group who mark their presence felt backing him on the opening "Swirl." Purcell, at first comes off displaying a bright, clean tone in the manner of a Wes Montgomery, and playing a unison chorus with saxophonist Hernandez. Hernandez exhibits a robust sound soloing before Purcell takes his solo. Purcell employs some tonal effects as he takes a blistering solo with the band helping build the performance's intensity. The pace lightens on the light swing of "Steady Comin' At Ya." Bassist Brough is featured after Purcell's clean lines with Helbing on brushes before Simon's solo. Purcell brings some heat for the latter portion of this performance. Purcell again makes use of a somewhat distorted tone to build horn-like lines on the funky musical delight, "Red Velvet Cake." With Darden Parcell's wordless vocalizing and Purcell's lovely single-note playing, "A Bela (For Darden)" in a very alluring performance. "Symmetricity in the Linear Evolution" is a straight-ahead groover. Purcell's subtle use of tonal effects here lend a  horn-like flavor to his playing to go with Hernandez's robust tenor sax solo.

The remainder of this CD is equally appealing whether the light swing of the lovely "You, and You Alone," the sonic explorations of "Missed It By an Inch," and a salute to a jazz legend, "'Trane-ing Wheels." This latter number sounds like a most imaginative contrafact to "Giant Steps." Then there is a sublime reading of the Van Heusen-Burke standard, "Here Comes That Rainy Day." The closing selection, "Norm's View" includes Darden Purcell's wordless vocalizing as additional voices with Simon's electric piano on a mix of electronics and straight-ahead playing.

Guitarists Pat Martino, Peter Bernstein, and Dave Stryker have expressed considerable praise for Shawn Purcell. To quote Bernstein, "Shawn Purcell shows his mastery and maturity as player and composer of the highest level." Indeed this recording merits these praises. Shawn Purcell's compositions and arrangements are as stimulating as his thoughtful, imaginative, and ardent guitar playing. With his terrific band, "Symmetricity" is Purcell's outstanding, if long overdue, debut.

I received a review copy from a publicist. Here is a performance by Shawn Purcell of "Darn That Dream."