The Dave Wilson Quartet One Night at Chris' 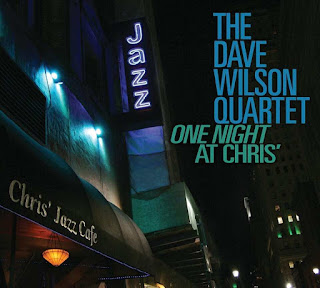 This is the fifth release of The Dave Wilson Quartet, recorded live at the famous Chris' Jazz Cafe 'in Philadelphia, PA in March of 2018. The quartet, comprised of Wilson on Tenor and Soprano Saxophones; Kirk Reese on Piano; Tony Marino on Acoustic Bass; and Dan Monaghan on Drums are heard playing four Wilson originals and six re-arrangements by/of pop/rock favorites. As noted in the publicity materials, this recording is a document of one evening of music recorded live, no overdubs, no second takes and with all the nuances, surprises and magic known as Jazz. Wilson studied with Bill Barron, although he fell under John Coltrane's spell as a teenager. Dexter Gordon is another influence on this along with some of the jam bands for this Lancaster, Pennsylvania resident.

"One Night at Chris'" opens with the swinging boogaloo of "Ocean Blues," where Wilson displays his authority playing over the tenor saxophone's entire range as the backing trio help drive this performance with pianist also taking a solo that shows his chops and melodic invention. Reese's brisk, liquid piano opens the interpretation of the Grateful Dead's "Friend of the Devil" (arranged by Wilson), although Wilson's soprano saxophone's squeaky tone makes this less appealing despite his serpentine improvisation and the excellent backing with Monaghan taking a crisp solo. More satisfying is the rendition of the Beatles' "Norwegian Wood" based on Herbie Hancock's arrangement. There is both robustness as well as his warmth on this lovely performance with exquisite backing by the rhythm section with bassist Marino taking a solo.

I am not familiar with Creed's original of "My Own Prison," but Wilson's performance provides an appealing gutbucket tone. Then there is Wilson's "Movin' On," with an unusual time signature (12/8) and some brawny, sinuous tenor sax along with Reese's surging lines. I find the soprano sax playing a bit more appealing on Brian Wilson's "God Only Knows," with Monaghan laying down an easy swinging pulse. "Untitled Modal Tune," is a burning number with Reese playing vigorously in a McCoy Tyner vein before Wilson wails on tenor here. Wilson lends an Afro-Cuban flavor to a superb performance of "Summertime," with some free blowing at times, crisp piano and some sparks in a spirited drum solo.

Then there is a spirited "Spiral," the title track of a previous Wilson album, with animated piano from Reese, burly tenor sax from the leader and a driving, pulsating groove. As Bill Milkowski concludes, "The crackling intensity of One Night at Chris' is a testament to what can happen on the bandstand on any given night. And this was a particularly good night indeed." The result is this excellent live recording.

I received my review copy from a publicist. This review appeared in the July-August 2019 Jazz & Blues Report (Issue 385). Here is a video of The Dave Wilson Quartet performing"Ocean Blues."