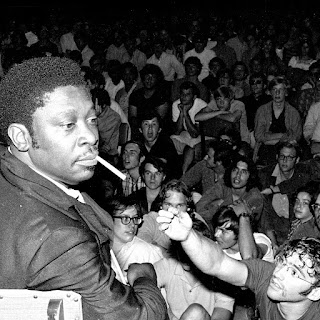 John Fishel recorded the Festival except for Son House's performance which Jeff Todd Titon did. In the accompanying book to the deluxe LP edition (I am not sure what is included with the CDs), it is stated "These recordings were stored in Jim Fishel's basement and have remained largely unheard for 50 years. In preparing this compilation, we treated the original tapes to an all-analog restoration process – including speed correction and equalization – prior to digitization. However, these are field recordings in the literal sense of the term: audience chatter is audible and there are some technical problems that proved difficult to fix. Every effort has been made to improve the sound without sacrificing the integrity of the performances." In other words, these may not be the highest fidelity, but as good as one is likely to be able to get. Listening through headphones may be the best way to enjoy this music.

The two Ann Arbor Blues Festivals (the second one held in 1970) were signature events. All the succeeding blues festivals pale in comparison to these line-ups full of artists who are in the Blues Hall of Fame in Memphis. There is a broad range of blues performances presented although there is a strong Chicago blues focus. The Chicago blues focus includes Howlin' Wolf, Muddy Waters, James Cotton, Magic Sam, Junior Wells, Pinetop Perkins, J. B. Hutto & His Hawks, Roosevelt Sykes, Luther Allison, Otis Rush, and Charlie Musselwhite. Freddie King is not included at the request of the estate. At the request of the family, the Otis Rush performance is from a preview of the 1970 Festival. There are down-home performances from Roosevelt Sykes, Lightnin' Hopkins, Son House, Arthur Crudup, Big Joe Williams, and Shirley Griffith. Sleepy John Estes and Yank Rachell performed, but the tape for it was lost. Clifton Chenier is accompanied solely by his accordion.

Despite any audio blemishes, the music here is often spectacular starting with Roosevelt Sykes opening with "Dirty Mother For You." He humorously wondered how he got by the censors when Decca issued the original 78. Sykes was in great form here. Arthur Crudup sounded fine singing "So Glad You're Mine," It was followed by the blistering slide guitar of J.B. Hutto on "Too Much Alcohol," and then Jimmy Dawkins' driving rendition "I Wonder Why." With Lefty Dizz on guitar, Junior Wells does a rousing "Help Me (A Tribute To Sonny Boy Williamson)." B.B. King (with Onzy Matthews on organ and Sonny Freeman on drums) is terrific on "I've Got A Mind To Give Up Living." B.B. King requested Mississippi Fred McDowell play "John Henry," resulting in a terrific performance in McDowell's rhythmically charged style.

Pinetop Perkins had recently joined Muddy Waters' band when he performed a rousing rendition of "Pinetop's Boogie Woogie." Members of Muddy's band backed him. Luther Allison may have been the most significant discovery of Ann Arbor, and his medley of "Everybody Must Suffer/Stone Crazy," is outstanding. I had a chance to see Luther at an Ann Arbor Blues Festival benefit concert a few months later, and it was a revelation. On "Tu m' as promis l'amour (You Promised Me Love)," Clifton Chenier shows he does not need backing musician in delivering a superb blues in French. Howlin' Wolf's rendition of "Hard Luck Blues," is an extended performance with Hubert Sumlin playing brilliant guitar. Wolf's band included Lucky Lopez on guitar, Bobby Fields on sax, and Calvin' Fuzz' Jones on bass. Otis Rush tears through "So Many Roads, So Many Trains," with Ernest Gatewood on bass and Sam Lay on drums. These performances are on Vol. 1, which is also split into two LPs.

Muddy Waters was impressive with "Long Distance Call" with its fattening frogs for snakes ending. This was a typical set opener for him at the time and opens Vol. 2 (also on 2 LPs). His band included Paul Oscher on harmonica, Pinetop Perkins on piano, Sammy Lawhown and Pee Wee Madison on guitars, Sonny Wimberly on bass and Willie' Big Eyes' Smith on drums. Charlie Musselwhite follows with a terrific instrumental, "Movin' and Groovin'," which also includes some spectacular lap steel guitar from Freddie Roulette, and piano from Skip Rose on piano. His band also included Louis Myers on guitar, Dave Myers on bass and Fred Below on drums. It is followed by Magic Sam's "I Feel So Good (I Wanna Boogie)." Shirley Griffith reworked the Billy Eckstine-Earl Hines classic "Jelly Jelly Blues" into a solo blues.

Lay's band also backs Lightnin' Hopkins who complains about folks at the Festival messing around with mojos before launching into a rollicking "Mojo Hand." While titled "Off the Wall," James Cotton's energizing instrumental is the same song he recorded as "The Creeper," It displays his fabulous harmonica and showmanship. Son House's "Death Letter" is the closing performance. I believe Freddie King may have closed the Festival, but one wonders how anyone (even King) could follow the baring of the soul in Son's riveting performance.

John Fishel recollects in the book, "Shortly after the Festival, I started college at the University of Miami. As luck would have it, James Cotton came to town a few months later for a performance, and I was assigned to interview him for the local underground newspaper. I asked him what he thought about what had happened in Ann Arbor: 'Oh man, I think that's the best festival I ever went to in my life! Everybody was just ready for it." After 50 years, I can still say that's the case for me. I hope you're ready for it too and that these performances prove as revelatory today, inspiring a new generation of blues listeners, musicians, scholars, and fans. That's the legacy of the 1969 Ann Arbor Blues Festival." That legacy is handsomely documented here.

I mentioned there is an accompanying book and the packaging includes many photos, an appreciation of the Festival and the story of the Festival, performer biographies with suggested further listening, and information on the artists and their accompanying musicians. One would be hard-pressed to think of a more significant historical blues release than this one. Get a copy for yourself and then get another as a gift for the blues lover in your holiday gift list.

I received a download to review from a publicist. This historic package is being released today, the 50th Anniversary of the Ann Arbor Blues Festival. For more information visit https://thirdmanstore.com/records. Here is a promo video for this package.