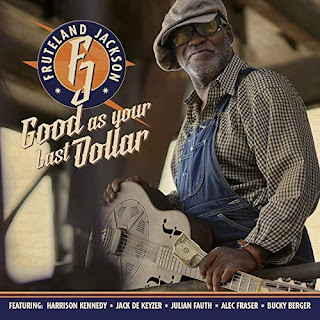 There are some interpretations of classic blues as well as original, sometimes topical songs. Discussing the title track, Fruteland says "I learned during the Great Recession, that no matter how long you've had a relationship with a utility or cable company, if you are late or unable to pay, you become only as "Good As Your Last Dollar." Nothing more, nothing less. Living through the Great Recession was a time of Economic and Psychological depression. For some an unscripted test of survival." The songs and the performances resonate with Fruteland having lived much of the music.

It has been several years since Fruteland's last recording. It has been worth the wait as he sings with authority, while forcefully playing resonator slide guitar on "Two Steps To Hell." It is a blues about the hard times while also being two steps to hell and one step from his baby's door. The delta blues approach of that number contrasts to the small group backing (Fauth's piano is impressive too to the gospel performance of "Death Creep." Here there is a blend of fingerstyle guitar and slide guitar, and an uncredited harmonica player (Harrison Kennedy?). The title track is a haunting performance as he remembers when one's word was bond, but now cash in hand beats a payment plan. Fruteland's interpretation of "Careless Love" uses a fresh arrangement for a heartfelt vocal. Harrison Kennedy adds vocal asides on a standout performance.

Fruteland observes that "It's odd isn't it that so many Blues songs are written about a spouse or lover breaking one's heart, while so few Blues songs are written about our parents." "All the Daddy I Had," set against a Muddy Waters styled backing is a song about a father breaking his heart. It is a moving performance with Fruteland wondering if Daddy loved Fruteland recalling that his daddy never said a kind word to Fruteland. "All Pain No Gain." is another engaging performance as he sings of trying to survive during a bad economy. "Damaged Goods" is a relaxed shuffle about having his heart and self broken by an ex, but noting that we are all damaged goods. Also of note is Fruteland's performance of "Love in Vain," where he pays tribute to Robert Johnson and playing original instrumental touches as well as a terrific vocal. Again there is some fine harmonica heard here.

"Good As Your Last Dollar" is a gem of acoustic blues with compelling performances of intriguing original blues songs and fresh, choice interpretations of classic blues songs. It has been way too long since Fruteland Jackson's last album, and this is a more than welcome addition to his body of recordings.