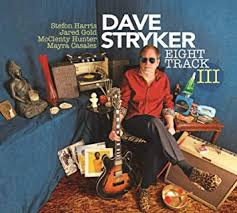 This CD is the third edition of guitarist Dave Stryker's s reimagining of classic pop tunes from the ‘70s with his working trio plus vibes. Vibraphonist Stefon Harris, who told Stryker he needed to complete the trilogy, joins Stryker, organist Jared Gold, and drummer McClenty Hunter on these nine tracks, five of which also have congas and percussion from Mayra Casales. Harris was on the first of these recordings with Steve Nelson being on the second.

Stryker suggests playing these classic melodies is a great way to connect with people and bring more folks into the music. This may be easy to listen to, but that stems as much from this familiarity. Listening to the ensemble and ensemble on the marvelous rendering of Steely Dan's "Pretzel Logic," or the Temptations' hit "Papa Was a Rolling Stone," one gets melodious performances with fresh, imaginative solos. The groove is swinging at a nice measured pace.

Stevie Wonder's "Too High" opens with Stryker's sparkling guitar with a deft touch and thoughtfully constructed solo followed by Harris' effervescent vibes and then Gold's greasy B-3. Then there is The Carpenter's ballad, "We've Only Just Begun," with deliberate, spare playing by Stryker and Harris adding to the preciousness of this ballad performance that is beautifully played at a slow tempo. In contrast, the group plays Burt Bacharach's "This Guy's In Love With You," at a brisker tempo, with Gold superb here. Roy Ayres' "Everybody Loves the Sunshine" is a bright feature for Harris' vibes, while Stryker and company perform a strong, blues-infused rendition of Stevie Wonder's "Joy Inside My Tears," that builds with smoldering intensity leading to its conclusion.

The music here is as entertaining, engaging and substantial as the two earlier volumes and serves as a solid conclusion to the "Eight Track" series if this is indeed the final set of the series.

I received my review copy from a publicist. This review originally appeared in the May-June 2019 Jazz & Blues Report (Issue 384). Here is a recent video of them performing "Papa Was a Rolling Stone."