Mighty Sam McClain A Diamond in the Rough 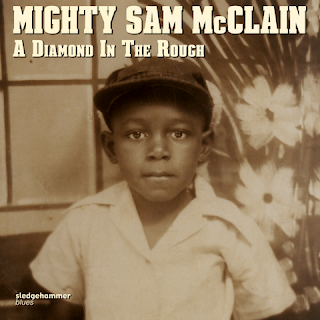 Mighty Sam McClain
A Diamond in the Rough
Sledgehammer Blues

I miss Mighty Sam McClain. One of the finest of the deep soul singers who recorded a bunch of classic 45s, his career blossomed after he started recording albums and crossing over to the blues audience. "A Diamond in the Rough" contains his final recordings made shortly before his passing in 2015, which are stripped-down recordings on which the only accompaniment is by Pat Herlehy's acoustic guitars with saxophones or flute added to some.

There is the celebratory feel of "My Everything" where his performance evokes Solomon Burke and followed by a slow blues, "When the Hurt is Over," that he soulfully sings over Herlehy's simple backing while Herlehy adds some single note runs. "Grooving" is a mid-tempo song on which Herlehy adds tenor sax over his guitar backing as he pleads for his woman to hold him and groove him as he growls, shouts and scats the lyrics. Charles Neville collaborated with McClain on "Love's Gonna Find," another soulful song with a gospel flavor, with McClain's fervent singing enlivened by some gutbucket tenor sax.

"Love Me If You Want To" has another solid blues vocal on a theme related to the James Cotton classic "Love Me or Leave Me," where he tells his woman he's tired of waiting on her, so make up your mind. One has to be impressed by the vigor and the virtuosity if McClain's singing throughout, but kudos go out to Herlehy with his solo on "Question" particularly impressive. Herlehy is on flute on "Believe" where Sam sings we can make it if we try, and let's get together to set us free. Perhaps he was aware of his mortality when singing "Southern Land" and reflecting about "going back to where it all started from" and how he misses it.

"Holy Ghost Fever" is a stirring, gospel lyric set to a blues groove and recollections of Muddy Waters, and Howlin' Wolf and others. The acoustic nature of these performances lend them an intimacy but also these performances sound as if not completely finished. A full horn section and a rhythm section would have provided a fuller backing to frame the vocals. For this reason, this atypical recording will most appeal to those already fans of Mighty Sam McClain. For those not familiar with his music, one might suggest "Sledgehammer Soul and Down Home Blues," "Sweet Dreams," or "Too Much Jesus (Not Enough Whiskey)" over this recording.

I received my review copy from the record company. This review originally appeared in the May-June 2019 Jazz & Blues Report (Issue 384), although a couple of minor stylistic changes have been made. Here he is heard on "When the Hurt is Over."