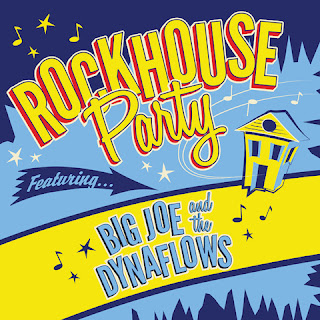 "Rockhouse Party" is a surprise recording by Big Joe Maher. It has been several years since the DMV drummer, jump blues singer and bandleader has had a new recording. His last album "You Can’t Keep a Big Man Down," was issued in 2011. Recorded in Franklin Tennessee, Maher is reunited with Kevin McKendree, the original Dynaflow keyboard player. He and McKendree co-produced this, and others heard here are young prodigy Yates McKendree on guitar, Robert Frahm on guitar, and Tom "Mookie" Brill on bass and vocals. On one track another guitar prodigy, Erin Coburn guests. Engineering the music is Evan Sarli, son of the late Jeff Sarli, who was the original bassist with the Dynaflows.

There is a nice mix of material that might be labeled urban blues as much as jump blues starting with a rendition of "Driving Wheel." While patterned after the Junior Parker recording, this is no copy and Maher delivers a relaxed heartfelt vocal strongly backed with the organ helping lay down a musical foundation, and there are terrific guitar solos displaying the contrasting attacks of Yates and Frahm. Brill has not previously been featured as a vocalist. I recall him doing a solid Howlin' Wolf styled vocal, but was not prepared for his soulful singing on Little Milton's "So Mean To Me," and O.V. Wight's "8 Men 4 Women," again with some strong backing.

Maher has always had an affinity for Smiley Lewis recordings and does a credible rendition of "Go On Fool" while laying down a solid second-line groove while Kevin McKendree plays driving boogie-woogie inflected piano. It is followed by an excellent Maher original "World Gone Wrong," with atmospheric accompaniment, and well-considered solos, to go with the topical lyrics. Brill sings a rollicking shuffle interpretation of an old Nappy Brown recording, "If You Need Some Lovin,'" on which Maher and Erin Coburn provide backing vocals. There is a cover by Brill of Fenton Robinson's "Tennessee Woman," that has a rockabilly flavor but comes off as a bit frantic. His other vocal is a solid rendition of Mack Self's 1958 Sun rockabilly recording, "Vibrate."

Maher's "Go With The Flow" is a strong original jump blues celebrating his new Dynaflow automobile, followed by another original "I'm a Country Boy," that sounds like it came from a Snooks Eaglin session for Imperial with Erin Coburn adding her solid fretwork. Two instrumentals, "Overdrive" and "Sleepy Joe" showcase the two guitarists. The two wrote the latter number with its ingratiating lazy groove. Percy Mayfield's "Two Years of Torture" closes this album with a superb 'three o'clock in the morning' flavored performance.

There are no surprises here for those familiar with Joe Maher on an excellent recording full of fine vocals, marvelous playing and a nice variety of blues songs.

I received my review copy from a publicist. This review originally appeared in the January-February 2019 Jazz & Blues Report (Issue 382). Here is a video from a few years back of Big Joe Maher with Anson Funderburgh on guitar.