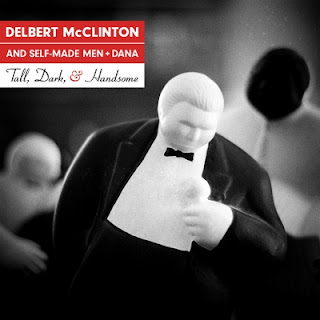 "Tall Dark & Handsome" is the 26th album from Delbert McClinton and is another collection of his roadhouse roots stew mixing blues, jazz, Americana, honky-tonk country, rhythm and blues, and more. Delbert, his long-time keyboard player Kevin McKendree and his guitarist Bob Britt co-produced this recording. It was recorded at the Rock House in Franklin, Tennessee that is owned and operated by Kevin McKendree. Kevin, Britt, and Kevin's son, Yates, were the engineers. Kevin and Britt did the mixing.

Delbert was involved in the writing of all 14 selections, many with Britt, McKendree or bassist Michael Joyce of Delbert's band. Delbert's current band of Dana Robbins (saxophone), Jack Bruno (drums), Mike Joyce (bass), Bob Britt (guitar), James Pennebaker (guitar), Quentin Ware (trumpet), Dennis Wage (keyboards) plays on this. However, on most of this McKendree and Britt are joined by Joe Maher on drums and Glenn Worf on bass with Jim Hoke on reeds and leading a horn section.

Now 78 one should not be surprised that Delbert is not quite as robust a singer as he was some years ago. If he doesn't project as powerfully and reach certain notes, he more than compensates by his timing, phrasing, and sometimes employing a  more conversational style. There is little that detracts from the pleasures to heard here. There are strong originals like the opening jump blues "Mr. Smith" where McClinton shouts about a hot band in a performance that the late Big Joe Turner might applaud. Then there is the honky-tonk flavored "If I Hock My Guitar" with Britt's stinging guitar. Stuart Duncan's fiddle adds a western swing accent to the bouncy "No Chicken on the Bone," while there is a Tex-Max accent on "Gone to Mexico." Hoke adds norteno flavored accordion along with with his sax, and Dana Robbins' sax.

Both "Lulu," and "Ruby & Jules," exhibit a sophisticated flavor with jazz-accented backing. In contrast, "Loud Mouth"  a rocking blues shuffle on which Britt's guitar channels B.B. King. "Any Other Way" is a late-night sounding saloon blues with a thoughtful, vocal. It is followed by "A Fool Like Me" a rocker with a New Orleans second-line groove. One lyric that stands up is "Can't Get Up," where he remembers his younger days but now realizes he can't get up to get down as he did before. McKendree, who is outstanding on the B-3 here, is superb throughout, as are the rest of the backing musicians here. With excellent original material, excellent production and McClinton's heartfelt vocals, "Tall Dark & Handsome" will have the roadhouse jukeboxes rocking tonight.

Received from my review copy from a publicist. Here Delbert performs "No Chicken on the Bone."