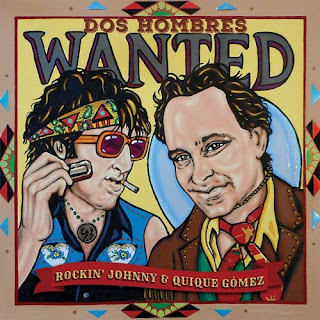 Singer-guitarist Rockin' Johnny Burgin has unquestionably established himself as a practitioner of old school Chicago style blues through his work with the likes of Taildragger, Eddie Taylor Jr, Mary lane, Little Arthur Duncan, Mary Lane, Jimmy Lee Robinson and Willie Buck as well as on his idiomatic recordings. Hailing from Madrid, Spain, singer-harmonica player Quiqué Gomez has a reputation as a jazz-influenced blues singer who also is a Sinatra stylist with a Spanish Big Band. They have joined forces on an album of 11 originals, and three choice covers backed by Eric Przygocki on bass and Stephen Dougherty on drums with Christian Dozzler on piano or accordion, Josh Fulero on guitar on three tracks, Greg Izor on harp for one track, and Farris on trombone on one track.

This recording will appeal to Chicago blues fans as this is a tight band led by two strong singers and players evident from Rockin' Johnny's opening shuffle "Your Charm Won't Help You," with a short fiery solo. Gomez establishes himself as a most capable singer on "Take It Like It Is" with his full-bodied harp solo following solos from Fulero and Burgin. He also sings on Burgin's "You Can't Steal My Sugar," although the performance is a bit too frenzied. A real surprise is a cover of Robert Lockwood Jr.'s "Funny But True" with a strong vocal by Gomez and Rockin' Johnny evoking Lockwood's unique guitar style.

With Dozzler adding accordion, Rockin' Johnny delivers a clever lyric using gambling analogies on 'Ain't No High Roller," the performance of which includes a particularly strong harmonica solo, followed by a stinging guitar solo. There is also an outstanding slow blues sung by Burgin, "Coffee Can Blues." Kudos to Przygocki and Dougherty who throughout provide steady and firm support. "Livin' Day to Day" is a topical blues played with against a Jimmy Reed shuffle groove on which Gomez delivers a fine vocal. More Jimmy Reed shuffle flavor is evident on Gomez's "Otro Hombre," a jaunty performance sung in Spanish.

With trombone and accordion, Burgin's "Step it Up Bro," is a change of pace that is more in the vein of a Nat King Cole jive blues. It sports exceptional harmonica that owes as much to Toots Thielemans as Little Walter and a jazzy guitar solo. "Are You Ever" is a first-rate Louisiana styled swamp blues-rocker in the manner of the late Lazy Lester with perhaps Burgin's best vocal on this recording. Gomez takes the lead vocal on a relaxed reworking of Tampa Red's "Don't Blame Shorty," which again has marvelous and imaginative harmonica along with Burgin's evocative classic Chicago blues guitar. It is a splendid close to a marvelously entertaining Chicago styled blues album.