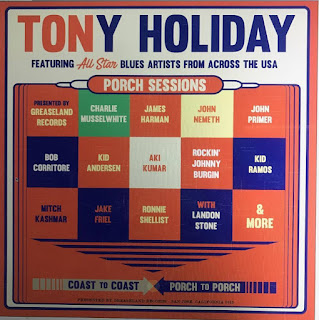 I am not familiar with harmonica player Holiday and guitarist Landon Stone, but the two have been traveling around the country, playing with and recording with a variety of blues folks. With Kid Andersen adding his bass, they ended up with this enjoyable recording with 13 tracks. They hook up on this recording with such artists as Charlie Musselwhite, James Harmon, John Nemeth, John Primer, Bob Corritore, Kid Andersen, Aki Kumar, Rockin’ Johnny Burgin, Kid Ramos, and Mitch Kashmar for a collection of enjoyable, informal blues performances.

Holiday is on harmonica on these tracks but is glad to have others take the spotlight starting with James Harman's whose amusing shuffle "Pickpocket Fingers," has a fine vocal and Kid Ramos adds his guitar. Holiday takes the harmonica chair on Harman's excellent vocal on "Special Friend," while he and Holiday both are heard on a nice country blues styled shuffle, "Goin' To Court." Bob Corritore adds harp behind John Primer's superb Muddy Waters' styled blues "They Call Me John Primer," with a terrific vocal and slide guitar in the vein of Waters with whom Primer played with. Primer also sounds terrific on Howlin' Wolf's "Tell Me Baby" with Corritore wailing on harmonica. Jake Friel sings gruffly on "A Woman Named Trouble" with John Nemeth adding harmonica along with Holiday. Nemeth takes a strong vocal on "Blues Hit Big Town," with Holiday's harmonica taking the tune out.

Aki Kumar sings on "That's All Right" with Charlie Musselwhite and Holiday also on harmonica. Rockin' Johnny adds his guitar on this entertaining, informal jam of a blues classic. It's like the other performances, fun and very entertaining if not classic. Holiday is an able singer as displayed on "Three Way Party" where the third person at the party is a bottle of Jim Beam with Mitch Kashmar and Ronnie Shellist both adding harmonica accompaniment and solos. Rockin' Johnny adds atmospheric guitar behind Holiday on "Coin Operated Woman," a nicely sung humorous lyric. "Hip To It" is a harmonica trio with some intriguing interplay between Kashmar, Shellist and Holiday.

While most of the recording is of Chicago styled blues, the closing track is a small group rendition of an old Bobby Bland number, "This Time I’m Gone For Good," that the late Johnny Adams recorded on his final album. William G. Kidd, a blue-eyed soul-blues singer, who is originally from Virginia, is excellent on this with Ronnie Shellist on harmonica. It is the highpoint of this CD along with the Primer tracks, but the level of these informal recordings is high. One does wish that the packaging provided more detailed information on who was doing what on each selection, and also that Holiday showcased himself up front a bit more, but few will listen to this and not be highly entertained.

I received my review copy from VizzTone. Here is one of several videos from Tony Holiday's Front Porch Sessions, Ali Kumar singing "That's All Right" with Charlie Musselwhite and others on Musselwhite's Front Porch.