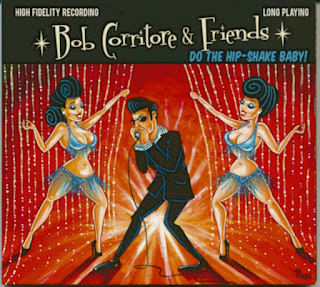 "Do the Hip-Shake Baby!" is Bob Corritore's latest blues party recording with a variety of artists including vocalists Mighty Joe Mislap, Alabama Mike, Oscar Wilson, Henry Gray, John Primer, Bill 'Howl-N-Madd' Perry, and Jimi 'Primetime' Smith. Backing musicians include Corritore on harmonica throughout, Gray on piano, Primer on guitar, Andy T and Anson Funderburgh on guitar, LA jones, on guitar, Fred Kaplan on keyboards, and Kedar Roy on bass. There are many others, and the poor layout makes getting some details like songwriting credits hard to read.

Those familiar with the previous recordings Corritore has produced will not be surprised by the solid revivalist Chicago and swamp blues performances heard here. It opens up with a solid rendition by Mighty Joe Mislap of Slim Harpo's "Do the Hip-Shake Baby!" that allows Corritore to display his harp skills over a swampy, trebly foundation. Milsap, who is also backed by the Fremonts, also ably sings another Slim Harpo song, "I'm Gonna Keep What I've Got." Alabama Mike, with LA Jones guitar and Corritore on unamplified harp, rock Jimmy McCracklin's jump blues, "Gonna Tell Your Mama." His performances include two Sam Cooke styled performances, "Worried Blues" and Junior Parker's "Stand By Me," both ably backed by the Andy T Band. Henry Gray sounds pretty vigorous for a pleasant revival of "The Twist."

Oscar Wilson does a nice Jimmy Reed cover, "Bitter Seed," with Corritore emulating Reed's harp style and Fred Kaplan lays down some nice piano in the backing. Jimi 'Primetime' Smith also does a solid Jimmy Reed shuffle, "I Got The World In A Jug," with Corritore on amplified harp, Fred Kaplan on piano, Bob Stroger on bass and Brian Fahey on drums.

Bill 'Howl-N-Madd' Perry wrote and delivers a solid down-home vocal on "You Better Slow Down," that sounds like an unissued Excello recording as Corritore wails in his backing, while John Primer does a homage to his former boss Muddy Waters on "Love Deep As The Ocean," with Bob Welsh channeling Otis Spann. With Junior Watson swinging on guitar, Sugaray Rayford energetically (perhaps a bit over the top) revives Bobby Saxton "Trying to Make a Living" with a fresh arrangement. His other performance is a Howlin' Wolf styled original, "Keep The Lord On With You!" with Kid Ramos on guitar that is the closing track.

With a variety of performers and consistently solid, idiomatic blues performances, Bob Corritore has delivered another winning collection of traditionally oriented blues.

I received my review copy from Vizztone Records. This review originally appeared in the May-June 2019 Jazz & Blues Report (Issue 384). Here is "Do the Hip-Shake Baby!"