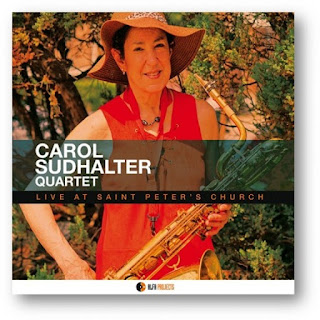 A pioneering woman in jazz, Carol Sudhalter since the early 1970s been advancing the cause of women in jazz as a musician (she is among the finest baritone saxophonists of the past several decades but also quite accomplished on tenor sax and flute), big band and combo leader, producer, and educator. She played with the first female Latin band and founded the Astoria Big Band (still active for 33 years). She had a discography of over ten albums which this new release, recorded at a performance at New York’s famed St. Peters Church is a welcome addition.

She is backed by a tight quartet that includes Patrick Poladian-Piano, Kevin Hailey-Upright Bass, and Mike Campenni-Drums and they perform fresh renditions of songs by Jobim, Sonny Rollins, Benny Golson,  Tadd Dameron, Bill Evans, Hank Mobley, Don Redman, and two originals. The opening rendition of Tadd Dameron’s “On a Misty Night” quickly establishes the authority and inventiveness she brings to the baritone sax with her robust, brawny attack while the backing trio provides strong support throughout this swinging, modern jazz set. There is a haunting Benny Golson ballad “Park Avenue Petite,” that exhibits her emotional range on the baritone sax while Hailey contributes a melodically grounded solo. There is a lovely flute solo on Bill Evans’ “Time Remembered.” There is a bit of swagger to her playing on Hank Mobley’s “Funk in Deep Freeze” along with some stunning piano which leads into a crisp drum solo.

She sings with a certain charm on “Colin Blues” which is dedicated to one of her students. It should be noted that the vocal, along with spoken announcements, is not well miked. Poladian is terrific here as is the leader on flute. There is a strong rendition of Sonny Rollins’ “Valse Hot” along with Poladian‘s swinging “Fun in the Alley” with the leader’s playful flute. Bassist Hailey is featured on “Gee Baby Ain’t I Good To You,” set against some excellent piano while Campenni varies his stick work to complement the two. A short melodic reading of Jobim’s “Luiza” closes this strong live recording by a woman who should be much better known.

I received my review copy from a publicist. This review originally appeared in the March-April 2019 Jazz & Blues Report (Issue 383). Here is “Park Avenue Petite,” from this album.