The Texas Horns Get Here Quick 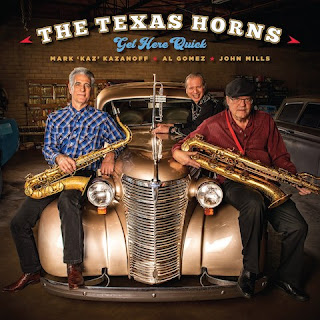 The Texas Horns, comprised of Mark "Kaz" Kazanoff (tenor sax), John Mills (baritone sax), and Al Gomez (trumpet), are one of the most in-demand horn sections for both recording sessions and on tour with some of the biggest names in the roots music world. "Get Here Quick" is their own album of blues, soul and roots music, backed by an all-star group of supporting musicians. Special guests include singers Curtis Salgado, John Nemeth, Gary Nicholson, Guy Forsyth, and Carolyn Wonderland; as well as guitarists Ronnie Earl, Anson Funderburgh, Johnny Moeller, Denny Freeman, Derek O'Brien, and Jonn Del Toro Richardson. Also, Red Young and Nick Connolly play keyboards.

"It took us a year to make 'Get Here Quick,'" recalls Mark Kazanoff, who with his horn-mates arranged all the songs and horns on the sessions. "I don't usually like to do record production projects like that. But this time, we had so many wonderful guest musicians in mind that we knew we would never be able to get everyone together in one place for a week or two; so we did the CD bit-by-bit. That also allowed us to use a couple of different rhythm sections."

There is a mix of vocals along with rhythm and blues instrumentals in the vein of King Curtis and Junior Walker. One of the top tracks, "Guitar Town," opens this recording. Guy Forsyth sings John Mills clever lyrics about knowing about every dive in the city, but it is hard being to be saxophonist in a guitar town. Anson Funderburgh is the lead guitarist and trades fours with Kazanoff, Mills, and Gomez respectively. Carolyn Wonderland sings vigorously and plays lead guitar on the driving performance of Kazanoff's "I'm Doin' Alright, at Least for Tonight," supported by a blistering Gomez trumpet solo. Mills composed the instrumental "Feel No Pain," with Johnny Moeller's stinging guitar set against the riffing horn before Mills wails on the baritone sax followed by Moeller's terrific guitar solo.

Gary Nicholson wrote and sings "Fix Your Face," on which he also plays guitar. After Kazanoff takes a honking tenor sax solo that the late Big Jay McNeely would have been proud of, Ronnie Earl displays his distinctive style. Nicholson also contributed the bouncy "Soulshine," with Anson Funderburgh on lead guitar and a terrific tenor sax chorus from Kazanoff. Gomez' instrumental "2018" has a New Orleans meets Bo Diddley groove. Moeller and Nick Connolly play short guitar breaks before a section of the interplay between the three horns.

If there is one fault, the horn section unison leads generally are not as memorable as the vocals or various solos are. Still, there are some exceptional performances throughout, even on those that are merely entertaining.

I received my review copy from a publicist. Here are The Texas Horns performing in 2018.