Kalya Ramu Living In A Dream 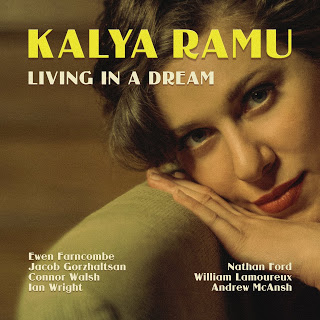 "Living In A Dream" is the debut jazz recording by the Toronto based vocalist Kalya Ramu. Ramu is very active in the Toronto music scene, leading, writing for and performing with multiple groups, including her blues-rock band Angora, The Bettys, her own band Kal’s Hot Four. On this recording she is backed by a quartet of Jacob Gorzhaltsan - Tenor Saxophone & Clarinet; Ewen Farncombe - Piano; Connor Walsh - Upright Bass; and Ian Wright - Drums. There are special guests including William Lamoureux - Strings; Andrew McAnsh - Trumpet; Nathan Ford - Vocals; and Nathan Martin & Jackson Welchner - Background Vocals. Ramu wrote 4 of the 11 songs, the others being classics. She cites Ella Fitzgerald, Ella Fitzgerald, and Sarah Vaughan as significant influences, but she has developed into a marvelous singer with a lovely voice, clear diction and nuanced phrasing who will sometimes add an appealing scatting.

Her quartet is superb backing her on her original "Little One," that introduces listeners to her delightful vocals. Gorzhaltsan adds cottony clarinet behind her soothing voice with a tasteful backing vocal present. On tenor sax, Gorzhaltsan kicks off a brisk "Just You Just Me," with her melodious voice and scatting. Gorzhaltsan contributes a vigorous tenor sax solo while the band swings like tomorrow will never come. On "Find In Me," strings enhance the longing expressed in her vocal. She displays a perkier side on "Four or Five Times" with Farncombe's delightful, stride-inflected piano and another energetic Gorzhaltsan tenor sax solo. There is a jaunty revival of "Am I Blue," with Andrew McAnsh's growling muted trumpet in the mix along with Gorzhaltsan's clarinet, and a sublime vocal duet with Nathan Ford on "Tea For Two." There is also a marvelous interpretation of "What's New," with Gorzhaltsan's cottony sax evoking Ben Webster and other tenor sax players. Also of notes is the spirited rendition of "It's a Good Day," and a wistful treatment of "You Go To My Head."

Throughout this recording, Ramu's pitch, phrasing, intonation, and lyrical interpretation are exquisite. This and the beautiful backing result in a superb vocal jazz recording. It is no dream that Kalya Ramu is so good.

Received as a download from a publicist. This review appeared in the May-June 2019 Jazz & Blues Report (Issue 384) although some stylistic revisions have been made. Here she is heard in a recent performance.