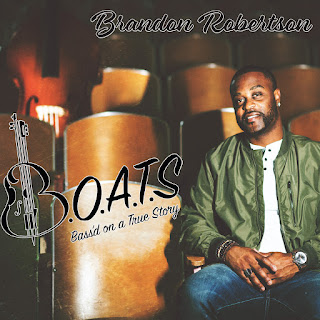 Bassist Brandon Robertson is a ten-year veteran of the Florida music scene and joined by various collaborators from a range of jazz scenes to best fit each tune’s particular flavor. Those present include Avis Berry - Vocals; Adrian Crutchfield - Soprano Sax; Lew Del Gatto - Tenor Sax; James Suggs - Trumpet; Mason Margut - Piano; Leon Anderson - Drums; Zach Bartholomew - Piano; and Gerald Watkins Jr. - Drums. Eight of the ten songs are originals that reflect something important in Brandon's development both as a person and as a musician. As he says, "Each song is attached to a memory that I hang on to; memories from significant moments in my life. From the birth of my kids, to my experiences in New Orleans."

Robertson establishes the authority of bass playing at the first notes of the opening "East of the Sun" in which he states the melody as Margut comps behind him. He plays comfortably taking the lead as well as keeping time and his full tone and his melodic sense underly the strong playing here. Del Gatto's tenor sax is heard on "The Next Thing To Come," stating the theme before Robertson takes the lead with Bartholomew and Watkins filling out the selection. Inspired by Kenny Wheeler's "Smatter," Robertson also anchors this straight-ahead swinger with Suggs showcasing a distinctive sax sound with Watkins trading fours with him. The other non-original is a spirited rendition of Benny Golson's "Stablemates," with Margut excellent while Anderson tastefully pushes the performance along. "Majestic Nights" has a slight Latin tinge with a full horn section with Robertson and Watkins having a vibrant duet before Suggs fiery trumpet solo and substantial contributions from Del Gatto and Bartholomew.

Inspired by Thelonious Monk, "Mr. Lonious" opens with an extended bass solo before Margut and Anderson enter, with Margut's use of chords and phrasing evoking the angularity of Monk's compositions. "Lullaby With Noelle" is a beautiful ballad opening with a bit of adorable dialogue by Robertson and his daughter, and followed by Robertson's splendid Arco playing. "Better Days Will Come" was written and dedicated to his late mother-in-law Ada Campos. It is a song that projects hope and that one should not lose sight of one's dreams that is beautifully sung by Avis Berry with Adrian Crutchfield on soprano sax weaving in and around her vocal while Anderson is particularly energetic backing a stirring performance.

"Phat Friday" was Robertson's first composition and written in New Orleans four months before Hurricane Katrina devastated that city. There is a strong New Orleans flavor by the rhythm under the weaving interaction between Del Gatto and Suggs before Bartholomew's solo builds in intensity. Robertson then takes the lead before trading fours with Watkins. A bass solo, "Maven's Arrival," again showcases Robertson's robust attack and tone, and his ability to structure a melodic improvisation. It closes Robertson's most appealing recording debut.

This CD will be released on September 13. I received a download to review from a publicist. Here is a performance by Brandon of Benny Golson's "Stablemates."