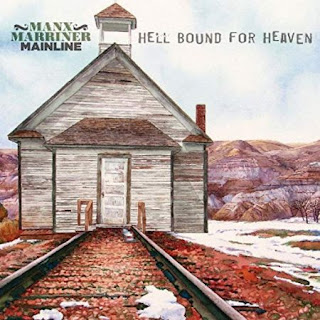 The Manx Marriner Mainline is a project of Harry Manx and Steve Marriner, two of Canada’s most award-winning blues and roots music artists. The two two multi-instrumentalists (Manx on slide guitar, banjo and his trademark Mohan Veena and Marriner on electric, slide, baritone and 12-string guitars, harmonica, bass, Hammond organ and drums) Both sing ad contributed songs to the disc that also includes several venerable blues and gospel songs including a Charlie Patton blues, and gospel numbers from The Staples and Reverend Gary Davis. Clayton Doley adds Hammond organ, and Moe Duella is on drums on some of this recording.

There is a nice mix of material that is well sung and played starting with the opening Manx blues "Nothing," with nice guitar and harmonica from Marriner, along with an ice shuffle groove and Manx's appealing, slightly gravelly singing. In contrast, Manx's "Everybody's Knows" is a nice country-tinged number with Marriner adding atmospheric guitar. Marriner's "My Lord" is a solid gospel blues with some nice acoustic 12-string guitar and harmonica. Manx plays a banjo lead and delivers a wistful vocal to a lovely ballad "My Only One," with Doley adding Hammond organ. Manx sings an engaging, straightforward, vocal on a small ensemble reworking of Charlie Patton's "Rattlesnake Blues." This is one of three covers as Marriner does a nice rendition of the Staple Singers "Wish I Had Answered," with an accompaniment that evokes Howlin' Wolf and Ray Charles. On Rev. Gary Davis' "Death Have No Mercy,"  Manx adds slide guitar to Marriner's 12-string guitar

The last song is an enticing ballad performance, "Rise and Fall In Love." It is sung by Manx with Marriner's adept electric guitar accompaniment with Jim Bowskill adding viola and violin at the end. It closes this delightful collaboration by Manx and Marriner that brings us fresh renditions of older songs mixed with intriguing, idiomatic originals that are wonderfully played ad well sung.

I received my review copy from a publicist. This review appeared in the May-June 2019 Jazz & Blues Report (Issue 384) although some stylistic revisions have been made to the published review. Here is the official music video for "Nothing."