Battle of the Blues: Chicago vs Oakland 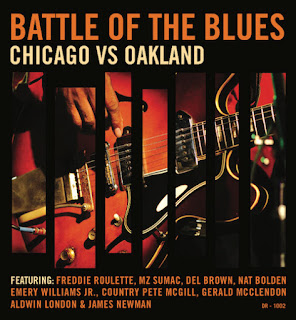 Twist Turner is a multi-talented drummer, songwriter, and producer who spent several decades in Chicago playing with a who's who of Chicago blues artists. In a book, "Blues With a Twist" he has chronicled his life in the blues starting from growing up in the Pacific Northwest to his time hustling and surviving in Chicago. In recent years Turner moved to Oakland, and while suffering severe health issues, he began starting to record some of the under-recorded blues artists in the Oakland area. Returning to Chicago, he found artists similarly needing exposure resulting in this release. This recording is not Turner's first efforts at producing blues albums. He produced the harmonica blues recordings of the "Chicago Blues Harmonica Project" that were issued on Severn Records.

Concerning "Battle of the Blues," Twist plays drums on all tracks, wrote 12 of the 13 selections, made all of the horn arrangements and plays others instruments on various tracks and wrote the liner notes including short artist biographies. There are numerous sidemen throughout this collection including guitarists Rusty Zinn, Maurice John Vaughan, and Dave Workman; saxophonist Skinny Williams; keyboardists Chris Burns, Roosevelt Purifoy, and Allen Batts; and bassists Art and EG McDaniel. Despite the wonderful musicianship heard in the backing, the focus (with one exception is on the singers heard here.

In the booklet, Turner quotes trumpeter Nicholas Payton "Just because its a twelve-bar form with some variation of I-IV-V chords, don't think your laying "the Blues" … it has no particular form. Relegating "the blues" to a form refutes its function. It can be found in many shapes and sizes." Payton's quote leads to Twist's discussion of the evolution of the blues, especially in the black community. He tells a story about how listening to a Syl Johnson record at Hip Lankchan's apartment, he initially responded it wasn't blues. Hip responded, "Its the blues, just a different kind of blues." The music on this recording is this different kind of blues, what some might call soul-blues. It is in the vein of Bobby Bland, Z.Z. Hill, Artie 'Blues Boy' White, Charles Wilson and Barbara Carr.

This collection opens with, Mz. Sumac, the only female, represented. The daughter of bluesman Craig Horton, Mz. Sumac displays the sass and fire of Barbara Carr as she sings about wanting a man who will give her what she needs. Skinny Williams provides a booting tenor sax solo. Aldwin London plays bass on several tracks including his vocal feature reviving Willie Nelson's "Funny How Time Slips Away." It is a fine vocal that is pretty close to Joe Hinton's hit although London is not quite up to Hinton as a singer.

The remarkable Freddie Roulette is represented by two instrumentals "Take It Easy," and "Red Tide" that display his spine-tingling lap steel playing. He is also heard behind Country Pete McGill's "Hootchie Coochie Mama," a blues that musically descends from "Hootchie Cootchie Man." McGill is the most down-home blues performer here, while Roulette's accompaniment and Roulette's solo is scintillating, Chris Burns piano on this track merits mention. It is hard to believe that Nat Bolden is 91 from his robust vocal on "Good Morning Mister Blues." This selection has the flavor of the uptown Chicago blues of Fenton Robinson and Andrew Brown with superb Rusty Zinn guitar set against a tight horn section.

Chicago singer James Newman impresses with his understated soulful singing on "Hit and Run Lover," and "Me and My Guitar." Maurice John Vaughan is the guitarist on the former song, Mark Wydra is listed for the latter tune. Emery Williams Jr passed away in 1996, and his two songs may be the earliest selections here. Maurice John Vaughan is the guitarist behind Williams on "Hurtin' On You," where he tells what he will do if he catches this person with his wife. On "Mama Don't Weep" Williams' gospel roots are evident, as he tells a former lover that he is sorry things did not work out as Bernard Anderson wails on tenor sax.

Turner observes that Gerald McClendon is known in Chicago as the Soulkeeper. He lives up to that moniker in"Cold on the Streets" with his passionate vocal about a cold-hearted woman but who is "hot in the sheets" giving good loving all night long." The other performer is "Mr. Excitement" Del Brown, a second cousin of James Brown, who is heard on his first recordings as a frontman. "Now That I Am Gone" is a terrifically sung deep soul ballad with some breathtaking vocal leaps. "Time Slippin' Away" is a heartfelt vocal about getting older and his hair turning grey as he struggles to pay his bills and survive with biting guitar fills.

"Battle of the Blues" is an excellent set of blues with a variety of marvelous blues singers handling some fascinating original material, solidly backed and well recorded. Kudos to Twist Turner for making these terrific performances available.

I received my review copy from a publicist. Here is a demo of Gerald McClendon singing. This song is not on the CD and again this is a song demo but it gives you an idea about how good a singer McClendon is.