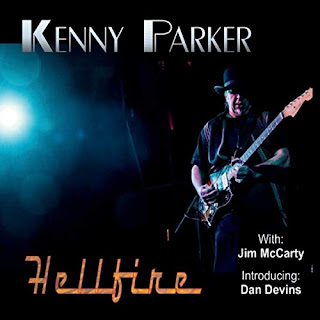 Albert King may have sung about the "Cadillac Assembly Line," but Kenny Parker worked at the Cadillac Factory during the day while playing in the bands of Detroit blues artists Mr. Bo (Louis Bo Collins) and The Butler Twins at night. While touring Europe with the Butler Twins in 1996, he caught the attention of John Stedman of JSP Records who recorded his debut recording "Raise the Dead" with The Butler Twins along with harmonica master Darrell Nulisch.

Parker is not the most prolific recording artist as the present album is only his third album. He is backed by his band that includes vocalist and harmonica player Dave Devins, bassist Mike Marshall and drummer James Marcaccio on drums with former Mitch Ryder guitarist Jim McCarty added on six of the 12 tracks). Among others present are keyboardists Bill Heid (who recorded decades ago with Koko Taylor and Fenton Robinson on Alligator) and Chris Codish (who graced the late Johnny Bassett's band). Parker is not a singer but wrote 11 of the 12 songs with the other contributed by Omar Dykes.

This recording is a straight-ahead modern blues date with occasional rock and roll touches. Things get off with a nicely played, relaxed shuffle "I Got My Eye on You" with not only a solid vocal from Devins but a nice harmonica solo with parker and McCarty swapping solos while Heid lays down some rollicking piano. Some funky organ and slashing guitar is present on the funky "Baby Come Back To Me," while there is a deep blues feel to the slow "Blind and Paralyzed," and then some hot rock and roll on "Bye Bye Baby," with Leonard Moon's buoyant piano and McCarty's sizzling slide guitar. The title track is a tough cautionary take of this woman Ruby whose kiss might blow your mind but be the death of one.

"Goin' In Circles," has a lazy, loping Jimmy Reed shuffle groove as Devins sings about going in circles over this woman with Heid pounding the 88s in support, although "Dance With Me" is less convincing in part because of its hypersonic tempo. "I'm Missing You" is a nicely done southern soul lament in the vein of Percy Sledge, while "Half Crazy" is a marvelous rocking blues shuffle. Another slow blues, "Backup Plan" may be the top performance here with Devins' best vocal and some superb playing from both guitarists standing out.

I received my review copy from a publicist. This review originally appeared in the March-April 2019 Jazz & Blues Report (Issue 383). Here is a video of The Kenny Parker Band.