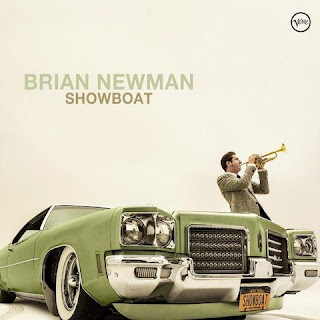 A Cleveland native, singer and trumpeter Brian Newman debut recording is this Verve release. Before coming to New York, he studied trumpet at the University of Cincinnati’s College-Conservatory of Music. In New York he started playing around while bartending, eventually leading his quintet playing several nights a week which developed its tight sound. He made a name for himself as a consummate entertainer on the NYC club circuit in recent years with extended engagements at The Oak Room, Birdland, The McKittrick Hotel and The Rose Bar. A friend of Lady Gaga who he met while bartending, he sometimes plays on her shows, and she appears on one selection. Newman's quintet backs him here and is comprised of Steve Kortya (Saxophone, Flute), Alex Smith (Piano, Keyboards), Joe Peri (Drums), Daniel Foose (Bass), and Paul Francis (Drums, Percussion). Some originals are mixed in with American Songbook classics on this disc which was produced by Dae Bennett, Tony Bennett's son, and record producer.

Newman is quite a capable trumpeter with a swinging, bright tone while saxophonist Kortya is  quite impressive as on the opening "San Pedro." This is a driving number that displays how good the rhythm section is as the horns trade fours with drummer Francis. His singing is decent but not as strong as his melodious trumpet as can be heard on the catching original, "Tropicalia." "Dancing In The Moonlight" has a funky reggae-flavored groove along with hot and appealing playing by Newman and Kortya. "Sunday in New York" is a lively tribute to his current home city with a credible vocal and more spirited playing.

Lady Gaga is, of course, a celebrated popular vocalist who has established herself as a singer of standards with her duets with Tony Bennett. She takes the spotlight on "Don't Let Me Be Misunderstood," with her personality exhibited here with strong trumpet accompaniment. The old pop instrumental "Spooky" is revived with a melodic rendition with Smith on the organ. Newman sings poignantly on "You Don't Know What Love Is," with some touching trumpet and Smith adding an engaging solo. Then there is the effervescent, swinging 'Pennies From Heaven," with choice piano and strong tenor sax. Bassist Foose is solid throughout, but especially vigorous here where he also solos.

With a lively Afro-Cuban big band feel, Tom Waits' "Jockey Full of Bourbon," closes this recording with a capable vocal and vivacious playing. With the strongly played and engaging music on "Showboat," Brian Newman and his Quintet display the reasons for the considerable appeal of their music.

I received this as a download from a publicist. This review originally appeared in the March-April 2019 Jazz & Blues Report (Issue 383), although I have made some edits to that published review for clarity. Here is the audio to "Spooky."