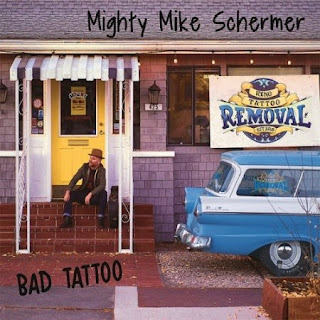 This is Mighty Mike's latest release featuring a dozen songs finding the singer-guitarist-songwriter at the Greaseland Studios with guest stars including Chris Cain, Rick Estrin, Aki Kumar, Jim Pugh, Nancy Wright, Billy Price, and others! He has been a guitarist with Marcia Ball since 2009 and before that worked with Elvin Bishop, Maria Muldaur, Angela Strehli, Bonnie Raitt, Howard Tate, Charlie Musselwhite, and Sista Monica amongst others. The core band on this CD is Schermer, guitar, and vocals; Steve Ehrmann, bass; Paul Revelli, drums; and Austin Delone, organ. Two tracks have a horn section of Eric Bernhardt, baritone and tenor saxophones; and Nancy Wright, tenor saxophone. Jim Pugh sits in on organ on three tracks while one song, “Ain’t That The Way Love Goes?” includes a different band with Jim Pugh, Chris Cain on electric piano, and a rhythm section of Kid Andersen, bass; and Alex Pettersen, drums. Cain also contributes guitar on one selection while Billy Price contributes a backing vocal. Schermer wrote or co-wrote all of the songs.

This is a solidly recorded and played CD. Schmerer is more striking as a guitarist than a singer but his somewhat light, plain singing I find quite listenable and honestly delivered. And his songs are solid idiomatic ones starting with the opening "She Won't Be Coming Back," with a groove, melody, and horns evocative of Little Walters "Up the Line." Then there is the amusing "Lover's Hall of Fame" about a relationship gone sour as he tells his ex that she's not on the ballot for the Lover's Hall of Fame. The Farfisa organ on "How Much Longer" gives it a feel of a beach club dance song in the sixties, while the title track is a relaxed jump blues as he sings about a tattoo about some other dude that she tries to hide. Besides his appealing singer, there is some sharp guitar akin to sixties Johnny 'Guitar' Watson as well as nice supportive horns including a booting tenor sax solo. There is a soulful "Ain't That the Way Love Goes," with a backing vocal chorus, and a "Baby Down the Well," with pounding piano, Rick Estrin's harmonica and a jackhammer groove.

"Hey Francine," a country-rockabilly tinged song is perhaps the weakest vocal here. It is well played like the rest of this recording. Schmerer has put together a strong backing ensemble with solid contributions from his friends. Add well-crafted originals, and one has a very engaging recording.

I received my reviewe copy from VizzTone. This review originally appeared in the May-June 2019 Jazz & Blues Report (Issue 384), although I have made minor stylistic changes. Here is a video of him covering Latimore's "Let's Straighten It Out."