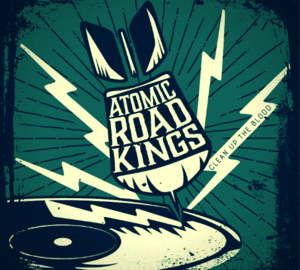 The Atomic Road Kings is a joint project of guitarist-vocalist-songwriter--engineer Big Jon Atkinson and harmonica wizard Eric Von Herzen. The two are present on all 12 tracks (11 written by Atkinson and one by Von Herzen) along with Bill Stuve on bass and Malachi Johnson on drums. While Atkinson is the vocalist throughout, he only plays lead guitar on four tracks and rhythm on 4. Scot Smart, Danny Michel, and Tony Delgado take the lead on other selections and pianist Robert Welsh guests on 1.

Atkinson recorded this using vintage, all analog gear and was done live to tape with the effort to capture the sound of the 50s gospel, blues and the like and presented in mono as opposed to stereo. The result is solid retro-oriented blues performances. Atkinson comes across as a robust, straight-forward singer on solidly-played, idiomatic Chicago-styled blues. Similarly, Von Herzen is a marvelous harmonica player with a full tone in the manner of George 'Harmonica' Smith.

Things start "I Got Time," continue with "Rumors" that feature a terrific Tony Delgado solo. On "My Way Back Home," Atkinson plays driving, lead acoustic guitar with Von Herzen's effectively repeating a riff in the backing. Then he plays some stinging electric guitar on the doomy title track with the harp adding to the atmosphere of the performance. In a similar vein, "Vibrations," has Danny Michel's stinging guitar along with Welsh's piano, while "Ain't For Me," is a moody shuffle.

The Atomic Road Kings strongly evoke the sound and feel on the '50s styled Chicago blues on "Clean Up the Road," a splendid recording that will appeal to fans of classic Chicago blues.

I received my review copy from a publicist. This review originally appeared in the March-April 2019  Jazz & Blues Report (Issue 383), although there have been minor stylistic changes to the published review. Here is a teaser for the CD.