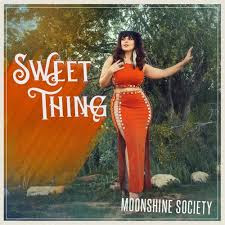 "Sweet Thing" is the second album by the DC area band, Moonshine Society. The core of the band is guitarist Joe Poppen and vocalist Black Betty (Jenny Langer), along with bassist Chris Brown and drummer Rodney Dutton and they have developed their blues and roots music stew. Lending support on some of the tracks are keyboardists Wes Lanich and Benjie Porecki, bassist Tod Ellsworth, and the horns of the great Ron Holloway, Vince McCool and Ken Wenzel. Jason Ricci's harmonica was added onto two tracks. Black Betty and Poppen, when not fronting Moonshine Society, are members of The Ron Holloway Band.

There is a fascinating mix of blues, blues-rock, and soul starting with the opening title track that was penned by Langer. It might be viewed as an answer song to Muddy Water's "Mannish Boy," with Ricci providing some energetic harmonica behind Langer's insistent vocal as she tells her man not to play games with her. "Shake" has a nice groove with a riff that evokes Nick Gravenites "Born in Chicago." Langer sings about going out and dancing the night away with Poppen laying down some fiery single note runs while Holloway has a booting solo. A particular standout selection is the reworking of the Ruth Brown hit, "Mama, He Treats Your Daughter Mean." It is set to a New Orleans second-line groove with Porecki on piano laying down some Crescent City styled piano. Vince McCool takes a brief, fiery trumpet solo, and Holloway on tenor sax and Wenzel on baritone sax take robust solos with the three horns leading the second line until performance fade out. Langer's "Come On Home" is a stunning performance in a Memphis soul style with Porecki channeling Booker T and Poppen evoking Steve Cropper.

There is a tribute to Johnny Winter on "Southern Road," which is more in a blues-rock vein with Ricci adding to this wide-open performance. Another highlight is a mash-up of Bill Withers' "Use Me" and Dr. John's "On Gilded Splinters," with her striking vocal backed by Poppen's explosive blues-rock guitar. Langer ably covers Etta James' "I'd Rather Go Blind," with a nicely shaped guitar solo and backing Langer whose vocal builds with passion as the performance unfolds. "Deal the Devil Made" contrasts with a more restrained vocal and backing. Poppen takes a solo on acoustic guitar on this selection.

A bonus track, "The One Who Got Away," is included. It was recorded in cooperation with "Cancer Can Rock," with a different backing band but also serves as another example of Langer's powerful, focused singing. It adds to the pleasures of an impressive recording.

I received my review copy from a publicist. Here is a video of a recent live performance of "Sweet Thing."