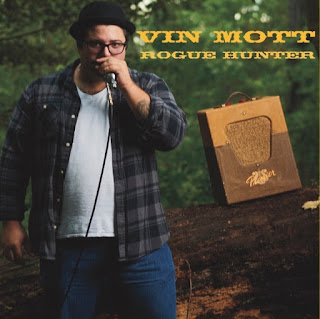 New Jersey blues stylist, Vin Mott is heard on his second recording with his vocals and harmonica backed by his tight band of Dean Shot on guitar, Steve "Pretty Boy" Kirsty on bass and drummer Matt Niedbalski. Mott wrote all twelve of the songs here and the performances come across like a good cold draft of one's favorite beer.

Certainly, one can identify with the sentiment of "Car Troubles Give Me the Blues" as well as the rocking shuffle "Give Me Cornbread." Both display his raw harmonica as well as powerful singing that is full of passion while his backing trio provides a full but not crowded sound. Shot is a reliable and versatile guitarist who can add fills or take a single-note solo. On the title track, he adds some Elmore James-Homesick James influenced slide guitar with Mott taking a nicely paced solo. There is some subtle interplay between Shot and Mott, while Kirsty and Niedbalski provide a tight bottom. The backing of "Ice Cold Beer" evokes some early 50s Memphis band blues from the Sun Studios, as Shot conjures up Willie Johnson backing Howlin' Wolf.

Then there is "Honey" where Mott's harp is in the vein of Rice Miller, the second Sonny Boy Williamson, with a relaxed vocal and lazy accompaniment. In contrast, "Whistling By the Graveyard," is a spirited original that makes use of the" John Henry" melody.  The backing has a skiffle band feel. It is followed by the superb topical blues of a Northern city's decay, "Patterson Is Crumblin'," with tough harp and guitar. The closing instrumental "Greaser," has an unusual structure that underlies the moody performance that serves as a coda to this wonderfully played album of traditionally grounded blues.

I received a review copy from a publicist. This review originally appeared in the March-April 2019 Jazz & Blues Report (Issue 383), although I have made some edits to that published review for clarity. Here is a video for "Honey."